The course text suggests that I carry out some research into contemporary street photography.  Street photography is a branch of photography that I enjoy both to look at and to participate in so I have looked at a number of artists’ work before.  As with all forms of art there are some that speak to me more than others.

What attracts me to the genre is that it often has a sense of spontaneity, humanity and emotion.  It also often has a sense of surrealism and humour / pathos which captures a moment in life and fires the imagination and somehow makes significant the otherwise apparently insignificant.  As Susan Sontag says on page 28 of ‘On Photography‘, ‘To photograph is to confer importance‘.  (*1)   To me the attraction and power of street photography, at least the styles of street photography that speak to me, lie in the perception that there is a very real sense of the images being grounded in reality, of being untampered with and unsanitised, of being what makes up real life in all its complexities and nuances, both public and intimate, with its beauty and its ugly sides.   Of course, I recognise that, as with all photography, the ‘reality’ of the image is influenced both by the photographer in the choices that they have made and the way that the image is portrayed and the viewer in the personal backgrounds and mindsets that they bring to the viewing experience.

There is another context in which street photography could, and undoubtedly does, have an appeal.  Looking at such images allows us to engage in a safe way in an activity that many find enjoyable if slightly dangerous – that of ‘people watching’.  There is a little of the voyeur in all of us and to be able to do this second hand, as it were, through viewing the photographs without the inherent risk of being ‘found out’ or of causing embarrassment or unpleasantness is a great freedom.  Catching others in their unguarded moments can speak eloquently and revealingly of their inner persona and feelings and also about the human condition as a whole.

To actually engage in street photography, however, potentially leaves the photographer exposed to questions, accusation and aggression particularly nowadays when trust, openness and acceptance are in short supply.  In France, it is illegal to photograph people in public places without their consent, not a situation that is conducive to the taking of meaningful street photographs which rely to a large degree on spontaneity and naturalness.   Thank goodness it is not yet the case in the UK, but there is usually still some fear and embarrassment to be overcome on the part of the photographer and reticence and distrust on the part of the general public when a camera is pointed at a crowd or an individual.  Some street photographers, such as the American Bruce Gilden, appear to have no reservation about invading another’s space as they intrusively get right up close to their subject and use flash as they shoot, but I, for one, do not have that degree of gall or lack of sensitivity towards my fellow men.  Sontag writes in ‘On Photography’  There is an aggression implicit in every use of the camera (page 7) and  Like a car, a camera is sold as a predatory weapon – one that’s as automated as possible, ready to spring (page 14).   (*1)  Undoubtedly, the appearance of a long lens on a shopping street can easily cause feelings of threat and discomfort amongst some of the more sensitive or more easily offended members of the public so discretion is essential if one is to avoid unpleasantness.

Below I have looked at the work of a few selected proponents of the street photography genre who have chosen different styles and formats to capture what they saw going on around them in the way that they wanted to portray it.

An American street photographer who is best known for her photographs of people going about their normal lives in poor neighbourhoods of New York, Levitt worked solely in black & white.  Her candid images were both staged and spontaneous and are full of life and emotion.  They provide a moving document of the time and also an insight into the lives and activities of ordinary people.  If one had to classify her work I suppose it would fall between documentary and surrealism.  (*2)

Another American photographer, Meyerowitz was an early advocate for the use of colour in street photography.  He was inspired by, and follows in the tradition of, Henri Cartier-Bresson, Robert Frank and Eugene Atget. Whereas he traditionally uses standard format cameras in order to capture action or ‘the moment’ he often uses large format 8 X 10 cameras when he wants to slow things down and work in a more meditative manner.  An interesting and revealing insight into his work (and the work of other photographers) can be found on the Eric Kim Photography website.  (*3)

A British documentary photographer and photojournalist, Parr documents the social classes in England and the wealth of the Western world in a unique and witty way. At an early stage in his career he switched from using black & white to colour and was at the forefront of the moves to acceptance of colour in ‘serious’ photography.  His work documents changing and disappearing lifestyles and cultures particularly amongst the working classes.  He also explores the themes of mass tourism and consumerism.  Stylistically, his work straddles both the surrealism and the contemporary photography camps.  (*4)

Another photographer who was at the forefront of the movement to bring colour into acceptance in contemporary serious photography, Graham is a British landscape / street photographer who works very much in the contemporary style.  His work is intentionally opaque and ambiguous as evidenced by his series ‘Does Yellow Run Forever?’ which comprises a collection of images of rainbows in landscapes, black women asleep in bed and yellow pawn shop fronts.  He is probably best known for his 12 volume collection of images shot after he moved to America and entitled ‘A Shimmer of Possibilities’ which together with his two other American series ‘American Night’ and ‘The Present’  through single images and short sequences ‘reflect upon the social fabric of contemporary America, whilst trying to find something closer to the experience of being and seeing in the world today‘. (*5) 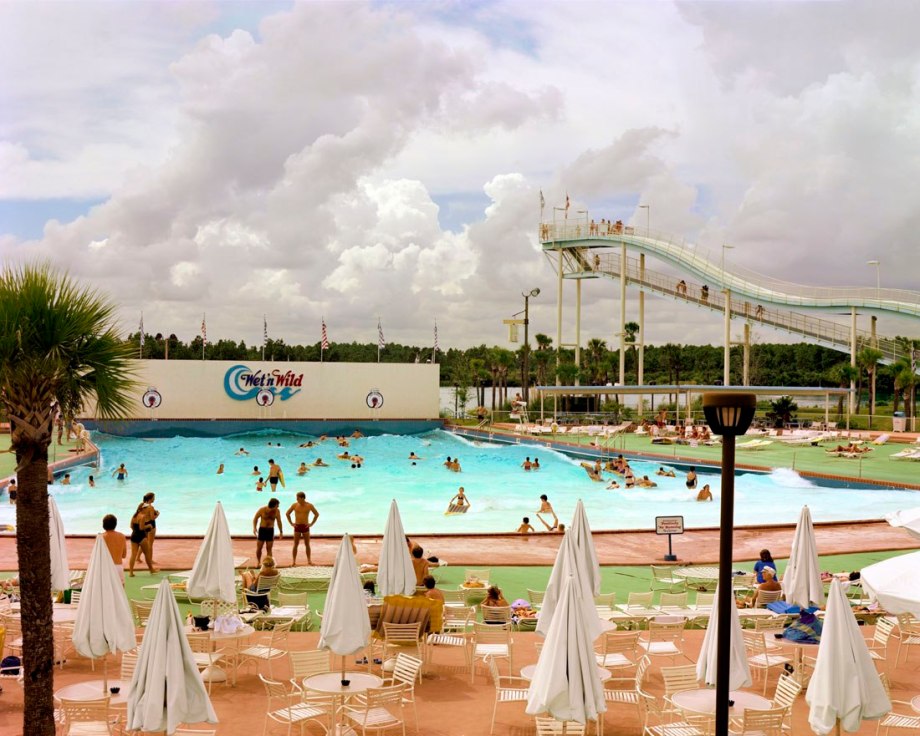 Joel Sternfield From the series ‘American Prospects’  © Courtesy of the artist and Luhring Augustine, New York, 2012

Sternfield is an American fine art colour photographer working in the contemporary style who is known for his large format documentary images of the United States. His work encompasses a number of genres including street photography but is a long way from the surrealism of earlier artists.  He is probably best known for his series ‘American Prospects’, a collection of images of unsuccessful towns and barren rural scenes which focus attention on the human-altered landscapes in the US.  His images, which are often ambiguous and reflect a concern for environmental issues, are influenced by the work of William Eggleston.  A series entitled ‘When It Changed’ was shot at the international climate change conference held in Montreal in 2005 and comprises candid images of delegates taken during the conference interspersed with shots of extracts taken from papers and documents relating to climate change science and legislation relevant to the conference.  (*6)

Born in 1952 and 1956 respectively, this American husband and wife duo of photographers publish their photographs both separately and jointly. (*7) Their interesting and illuminating book ‘On Street Photography and the Poetic Image‘ (*8) explores both their own work and the work of other leading exponents of the street photography style.  It is a good lesson in the richness and diversity of photographic styles to look at the very different work of these two artists.  The colour tones of Rebecca’s images are generally much more muted, the compositions more random and edgy and the subject matter more ethereal and other-worldly than that of her husband who works in bright, saturated colours to capture busy and complex scenes full of surprise and quirkiness.  While both are clearly contemporary in style, Rebecca’s work is much more ambiguous, restrained, opaque and reflective (she herself describes some of her work as ‘disorientating’) whereas Alex’s work is immediate, vibrant and dynamic.

The small selection of photographers included here demonstrate the wide range of work that can be grouped under the description of street photography. Some images verge on landscape photography, others almost on the abstract and others still nod towards portraiture.  Some have a disconcerting quality or are lyrical, others are humorous or quirky, while others are brazen or emotionally charged.  All of them encapsulate something unique and shed a new light on what might be otherwise perceived as ordinary and of no great consequence.

Whereas black & white was the format of choice for most street photographers (indeed most photographers of whatever genre) until the late mid 20th Century, and colour was deemed to be only for the casual amateur or advertising copy, increasingly the use of colour in street photography has become an indispensable and vital element in the artist’s techniques.  Many contemporary artists have made their names and reputations through their use of colour but the way that the format is used by photographers differs considerably from the bland almost monochromatic palettes of some to the bright and almost garish painting in colours which others use as their trademark.  As an extreme, Paul Graham in his series ‘American Night’ used overexposure and other techniques to render the images almost colourless and transparent.

Whereas the use of black and white tended to ensure that the images were treated as ‘serious’ art works and viewers were able to contemplate the content and nuances of the images without the complications and distractions of colour, the introduction of colour into street photography allowed artists to explore and display new ways of looking at their subjects.  They were able to provide a new language for their art and to open up a new repertoire of emotional responses in their audience.   The colour became as much the subject of the images as the physical subjects themselves.

Surrealism still lingers as a sub-genre or style within street photography as is evidenced in the work of Martin Parr, Bruce Davidson, Alex Webb, Diane Arbus and Joel Meyerowitz to name just a few.  It is identifiable in the quirkiness, the strange juxtaposition of elements within the image and/or the spontaneous capture of a moment and the homing in onto a passing action.  More studied and reflective work is more the hallmark of many contemporary photographers such as Paul Graham, Massimo Vitali and Joel Sternfield who often work in large format to create extremely finely detailed images that can be blown up to large size.  The work of some recent or contemporary photographers bridges the gap between surrealism and the more considered, some would say empty or bland approach.  Martin Parr is one, as is Rebecca Norris Webb.

2 comments on “STREET PHOTOGRAPHY – SOME THOUGHTS”