TWO SIDES OF THE STORY

This Assignment asks me to create two sets of photographs telling different versions of the same story.  The aim of the Assignment is to help me to explore the convincing nature of documentary, even though what the viewer thinks they see might not be the truth.  I am asked to make both sets equally convincing so that it is impossible to tell which version of the images is ‘true’.  I have written in an earlier post on my Learning Log about some of my ideas and preparation for this Assignment.  Suffice it to say here that after discussion with Russell, my tutor, I decided to proceed with the theme of ‘pristine’ and ‘polluted’ landscapes.

I have a long standing interest in the natural environment and the factors that affect it.  The concept of the theme I chose for the Assignment is that a casual and detached view of countryside will give the impression that it is pristine and little affected by man’s activities, whereas a closer and more informed inspection will tell a different story.  Photographs taken for the purposes of illustrating books or tourism literature, or selling as postcards, calendars or prints will always be taken from a location and in such a way as to show the landscape in its most attractive and desirable light, omitting anything that detracts from its purity, naturalness or beauty.   Photographs taken from a slightly different angle or viewpoint, or with a different purpose in mind, may well create a very different impression despite being taken in the same location.

I wanted to explore this disparity by taking two sets of photographs at scenically attractive locations near to me, one set of landscape views suitable for publicity purposes and the other taken to include man-made elements (litter or other forms of pollution) which were present, at the site. These locations, the Parrog at Goodwick, Abercastle and Aberfelin on the North Pembrokeshire coast, are often visited by tourists and depicted in tourism literature and local photographer’s work.  On arriving at the sites I first searched for examples of litter and / or pollution that would be suitable subjects to fulfil my purpose for the Assignment.  In all but one instance and I wanted to increase contrast I did not move the items as I wanted to maintain genuineness and honesty in their depiction and chose to shoot them in the exact locations in which they were found.  The exception was in one shot (Abercastle 2) where, as the items of polluting material were relatively small and varied in nature, I collected a few examples from the immediate area (within 10 feet) and added them to some already present.

I predominantly used a Canon 7D body with a Canon EF-S 10-22mm wide angle zoom lens  but I sometimes used a Canon EF 24-70mm 1:2.8 L USM lens depending on the subject and its location.  I mounted the camera on a tripod in order to ensure that the direction of view remained constant and I fitted a Hoya CIR polarising filter as the weather was bright and sunny. My method of operation was to find a height and direction to shoot that gave me both a reasonable landscape shot with the zoom for distance and then to zoom back sufficiently to also include the litter or other pollution within shot.  The specific location within the landscape that I chose to shoot from and the direction of the shot were determined by the place where I found the item.  As a result, the landscape shots are not necessarily taken from spots where I would normally have photographed the area for its finer landscape qualities.

I should note that in the case of both The Parrog beach and Abercastle, the polluting items were found within 10 metres of a rubbish bin which had clearly been ignored.  I hardly need to add that in all instances where I found and photographed moveable polluting items I removed them and placed them in the nearby bins or took them home for recycling.

1a).  The Stena Irish Ferry Terminal from the breakwater. 2a). Breakwater on Parrog foreshore with ferry leaving harbour 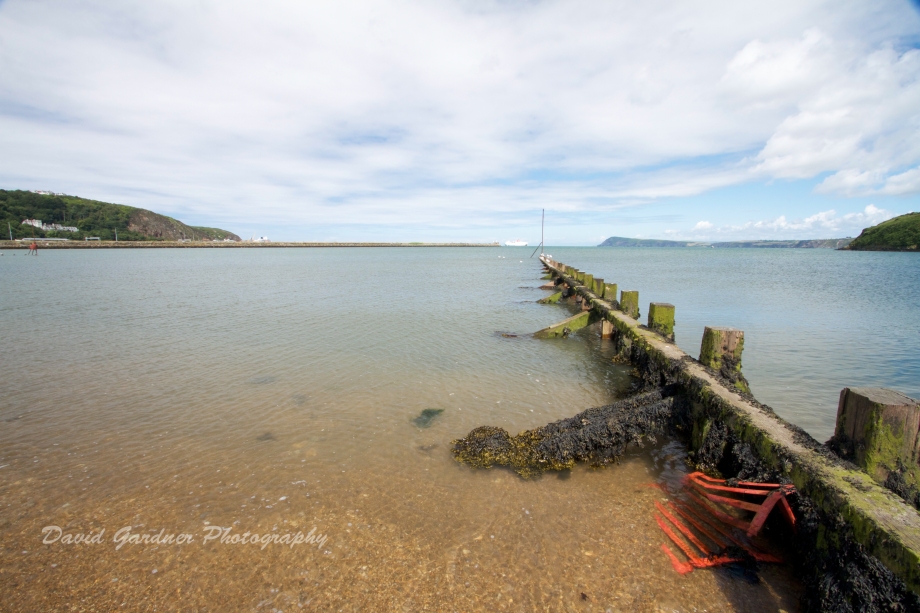 2b).    Washed up remains of old metal bench

3a).     Parrog foreshore looking towards Fishguard

4a).  Main breakwater, the Parrog 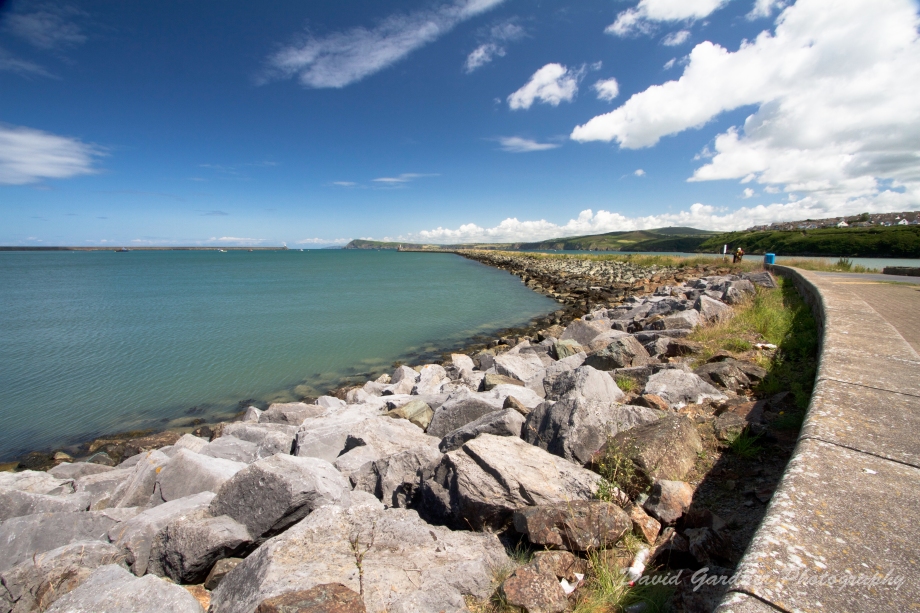 4b).   Bottles and other rubbish alongside breakwater wall

5a).  Towards Fishguard from the Parrog main breakwater

5b).   More litter intruding into the scene

6a).  Parrog beach and Fishguard from the main breakwater 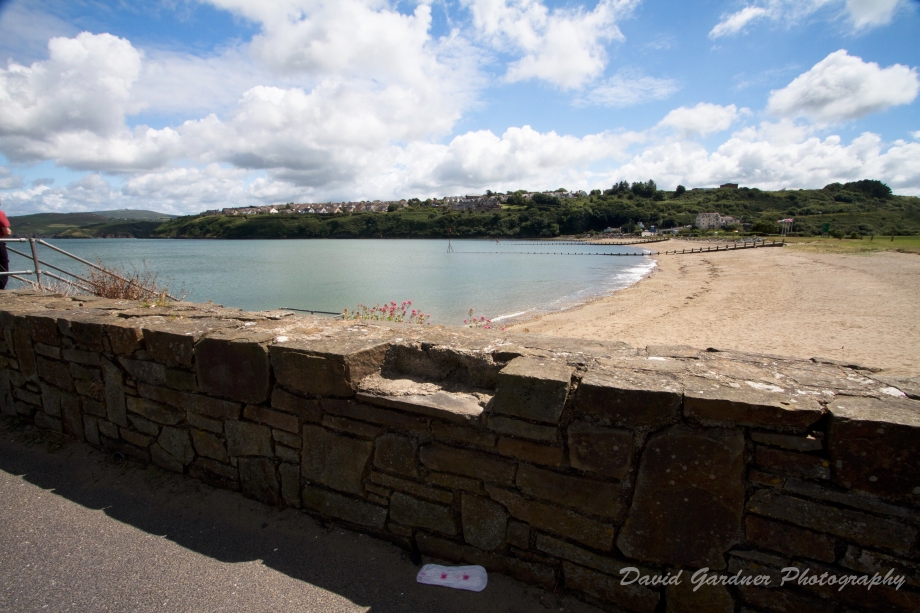 6b).   Lady’s sanitary towel in wrapper against the wall 7b).   Dumped can and bottles in above woodland location 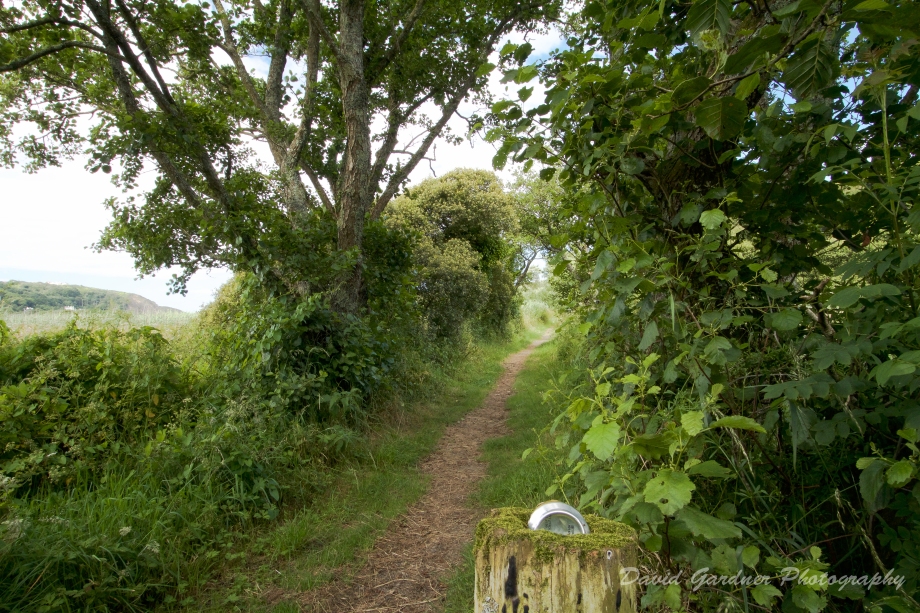 1a).    Abercastle harbour and moorings 1b).  Plastic and fibreglass with remains of peregrine prey 2b).  A collection of small plastic, nylon, rubber. etc. items

2c).    Collection of small polluting items from a 10′ square area

3a).    Small stream behind the beach at Abercastle

3b).  Pollution arising from agricultural runoff

1a).  Ruins of old mill overlooking the sea 1b).   Plastic food wrappers dropped in a local beauty spot

2a).   Unspoilt Aberfelin Bay and cliffs

2b).   Plastic balloon and string washed up on beach

3a).   Another view across scenic Aberfelin Bay

3b).   Glass bottle discarded on rock on the beach 4a).   The cliffs at Aberfelin Bay

4b).  Plastic milk bottle washed up on the beach

I hope that it is clear from these two sets of photographs that the camera can be used to portray a number of different versions of the same scene depending on where the lens is pointed or how much of the scene is captured. It is a simple matter to create different impressions in the mind of the viewer by altering the contents of the image or the manner or style in which the image is portrayed.  If one was only to view the first set of images one would be led to believe that the Pembrokeshire landscape was pristine and pollution free, whereas if one only saw the second set one would tend to have a bad opinion and be less inclined to visit the area.  Both sets of photographs accurately record the image that impinged on the camera’s sensor, but, as a result of the choices made by the photographer, neither set tells the full story of the scene in front of the camera.

As it happens, on visiting the locations to shoot the images for this Assignment I discovered that, as there had not been any major onshore blows or big tides recently and the tourist season had yet to begin, the amount of rubbish on the beaches was not as considerable as it might have been otherwise.  There were, for instance, no examples of commercial fishing gear to be seen and no major deposits of plastic flotsam and jetsam.  In addition, at the Parrog I saw the Council worker picking up rubbish and emptying bins as I arrived so what I found to photograph was what was left behind.  I also have to say that Pembrokeshire takes a pride in its beaches and keeps them in a generally good order which is why we have a number of Blue Flag designated beaches in the County.

On the face of it, the amount of rubbish and other polluting material that I found might appear small and inconsequential.  In addition, there was a considerable amount of natural debris washed up in the shape of weed, wood, shells, feathers, dead crustaceans, the remains of two pigeons killed and eaten by peregrine falcons, etc. which some might take exception to and consider undesirable.  The difference is that the natural materials will be eaten by scavengers or will bio-degrade quickly and enrich the environment.  The man-made materials on the other hand will take a very considerable length of time to be broken down, in the case of plastics this can take hundreds of years or longer, and the breakdown products will enter the food chain to the detriment of all life.  The significance of this polluting material in time can be exemplified by the stream in which the evidence of agricultural pollution was found.  This stream used to be full of small trout but after repeated agricultural run-off over several years it is now fishless.  In addition, the balloon is a major hazard for turtles which often die from ingesting them after mistaking them for jellyfish.

This is, however, rather going off the track of the Assignment.  The point that I am trying to make through these sets of photographs as well as meeting the requirements of showing two sides of a story is that photographs can be used to shift perception and open the viewer’s eyes to different ways of seeing.  Many (the majority?) of the visitors to these locations would have had their eyes fixed on the large-scale, the more distant horizons and would have taken away a memory of attractive landscapes in natural harmony.  Those few who were more attuned to the detail and the close at hand would have noticed and been influenced by the elements in the landscape which were at odds with its naturalness and balance and would have felt uncomfortable with the disregard and ignorance that man has for what he does to the natural world.  I hope that this comes over in the images in this Assignment.

Whilst I initially had some difficulty in coming up with a theme for this Assignment as suggested in an earlier post, I am generally pleased with the end result and the decisions that I made in relation to the choice of theme and its realisation.  I recognise that the images are very ‘old school’ in terms of their style, composition and treatment, and therefore at odds with the OCA’s fashion for the contemporary and bland in landscape photography, but I would defend that by suggesting that the concept of the chosen theme required the portrayal of the pictorially attractive and instantly accessible.

As the series of images are essentially documentary in nature, I am also pleased that I chose the subjects with integrity and honesty to reality (with one exception) by photographing the items of rubbish and pollution exactly where they were  found rather than moving them to somewhere else or grouping them together.  The viewer can therefore be left in no doubt that that images portray reality and are not contrived to ‘tell a story’.  I recognise that this series could possibly be extended and developed with added text to create a body of work in small book / box set format with potential for informing and influencing people on environmental issues.

Had I taken the images at a different time of year it is undoubtedly true that I could have found much more obvious evidence of pollution and rubbish which might have made greater impact in visual and psychological terms.  However, the fact that the examples that I found were by and large small scale and therefore more easily overlooked by the casual observer highlights the fact that we often miss what is under our noses and does not detract from the knowledge that these small scale polluting loads still add up to a very significant impact on the environment as could be explored in accompanying texts.

I have carried out a post-Assignment self assessment against the OCA’s assessment criteria points and have included this as a separate post in the Assignment 1 folder.  This sets out a more detailed account of my thoughts on my work for the Assignment.  I look forward to learning what my tutor makes of this work.