EVERYTHING UNDER THE PEMBROKESHIRE SKIES  –  A PHOTOGRAPHER’S LIFE

On 18th November, I attended a talk at Oriel y Parc in St Davids by Pembrokeshire photographer, Philip Clarke.  I had not been aware of Philip’s work before but it was clear that he had quite a reputation in some circles.  The reason for my lack of awareness became apparent as the talk progressed.

It transpired that Philip is predominantly a landscape photographer but he also takes photographs of people and local events.  He is best known for his traditional landscapes, many of which have been used in Pembrokeshire National Parks and Pembrokeshire County Council publications.  His landscapes have also been extensively used in his own range of postcards of Pembrokeshire views, some of which have sold in large quantities.  A postcard of St Davids Cathedral in the snow has sold over 20,000 copies!  Not being much of a follower of tourist postcards and publications or civic and cathedral events, I had not moved in the circles which would have introduced me to his work previously.

Philip has been a photographer for much of his life and is a firm believer in the traditional and the tried and tested.  He was brought up with film cameras and has seen no reason to change to digital. He is a traditionalist with traditional darkroom skills. In his own words, “Why exhaust yourself in front of a screen, when you can have the ecstasy of building an individual image from a combination of light and salts. There is really no contest.” It was clear from his talk that he did not have much time for the trickery that can be employed with digital images and preferred the ‘honesty’ of the traditional film photography.

He enthusiastically waxed lyrical about the photographic process, describing photography as being ‘a language of description’.   I noted a number of memorable phrases that he used, all of which clearly demonstrated his engagement with and love of his subject.  These included the following : –

Two photographers that Philip mentioned as being particularly inspirational for him were Ansel Adams and Fay Godwin, and Adams’ phrase ‘The joy of serendipity‘ was particularly meaningful for him.

After giving a description of his background and his outlook on photography (without giving away any secrets about his equipment or techniques which he said he was not going to explore!), Philip gave a slide show of some of his photographs which included landscapes, people and events.  What struck me was that, although they were technically good, many did not excite or inspire me as they were very traditional and seemed to be more of a record than an attempt to capture something more aesthetic.  It was the black and white land- and sea-scapes that caught my attention and I reproduce a couple of examples below.  These have inspired me to experiment more with black and white to capture the energy and wildness of the local environment. 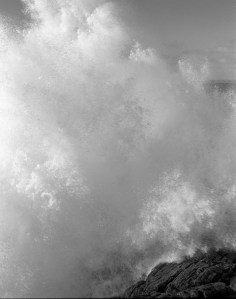 There are a number of younger pretenders to the throne of Pembrokeshire’s ‘photographer in residence’ now and the digital age is taking centre stage in their work.  I was pleased to have attended Philip’s talk as it enabled me to see how photography is evolving over the years and it also helped me to further hone my own appraisal of photographs.