RECREATING A CHILDHOOD MEMORY IN A PHOTOGRAPH

This Exercise requires me to recreate a childhood memory in a photograph.  I am asked to think carefully about the memory I choose and how I’ll recreate it.  I am free to approach this task in any way I wish.

The Exercise brief gives me considerable scope in the style and content of the final image that I create and this has required me to think in depth about the options open to me and the decisions that I needed to take.  These included: –

i).    what particular memory I wanted to portray and why, and whether I wanted to focus on a specific instant or a general event

ii).   whether I wanted to include myself in person in the final image, will I ask someone else to take my place, or will I be absent completely

iii).   whether I would choose to recreate the memory literally or use some metaphorical representation

iv).   will I let the final image speak for itself or will I provide an accompanying explanatory text

I decided early on that I didn’t want to include myself or anyone else in the image.  I have never taken a selfie and it didn’t feel right to do so now.  It is, however, something I might try to pluck up courage for when I address Assignment 3.  I could also find no enthusiasm for involving anyone else in the image.  I also  decided early on that I wanted to portray a specific moment rather than a general event and so I concentrated on bringing a number of significant instant memories to mind which included the following : –

In the end I chose none of these! Despite the many examples of memories that came to me, there was one moment that kept returning and I can only think that it is because photography was involved and that there were hidden depths to explore.  The resulting image is shown above, and the reason for it is given below.  Anyone reading this piece might wish to explore their own reactions to the image before they read my personal explanation below.

When I was about 10, my family stayed for a holiday with distant relatives in Lincolnshire.  My parents wanted to give us kids something to keep us busy and out of the way so they sent us off into the surrounding area on a photography competition.   We were each given a roll of black & white film and my parents’ Brownie box camera to share between us and we had to go off at different times to find suitable subjects.  Before we went out our parents gave us general advice on what to do and what not to do  – look for interesting subjects; make sure the subject is central in the frame and that the horizon is level; avoid shooting into the sun; hold the camera steady, etc. I don’t recall any technical stuff or that the camera had any means of control settings (if it did they were not explained to us) so it was a case of the blind leading the blind.  I think that we each had an hour to shoot our film and return to base. The films were to be sent off for processing and then a small prize was to be awarded for the ‘best’ shot as determined by our mother after the photographs had come back from the processor.

After the photos had been returned, my mother went through them and wrote comments on the back of each print.  As far as I can recall I didn’t win the best image competition and I don’t know who did. What I do recall is the deeply uncomfortable emotions I felt in response to the comments on the backs of a couple of my photographs.  In an attempt to show initiative and capture an image with more interest than any of my brother’s or sister’s shots I had climbed some way up a hawthorn tree in order to photograph a pigeon’s nest complete with eggs, a rather risky venture whilst clutching my parents’ camera!  I had also taken a photograph of the tree because I was impressed by the fact that it was isolated in the centre of a field standing on its own and at the mercy of the elements. It also linked with the image of the nest as it showed its location.  As it happens, the image of the nest and eggs was seriously under-exposed and fuzzy because of the lack of light up the tree and movement of the camera and the subject was un-readable.

My ‘heroic’ attempt to capture something special was dismissed with some throw-away comment like ‘I can’t see what this is so something must have gone wrong with taking the photograph’.  At some stage I must have mentioned to my parents that I had taken a photograph of a pigeon’s nest because on the back of the image of the tree was the comment ‘If this is the picture of the nest then you have stood too far away.  Try to get closer next time!’  The effect on me was powerful and negative and I can still feel it now.  Indeed similar feelings have cropped up many times in my life in response to the same or similar stimuli. I was the oldest amongst my siblings and therefore always expected to be the most mature and advanced.  I always felt therefore that I had to out-perform them in order to earn the respect from my parents and others in a position of authority that would ensure that I was accepted.  On this occasion, my mother, from her written comments, did not credit me with having the knowledge and understanding that was required to be close enough to take a reasonable photograph of the nest.  What I immediately took from it was that any fool would know that a decent photograph of a nest would not result from standing at a distance from the tree so, by implication, she thought I was a fool!  I had failed not only to achieve the special image that I sought but I had also failed to gain any recognition or respect for the attempt, instead being seen as an idiot with no common sense.  This feeling / belief and resultant lack of self-belief has stayed with me in some form or another throughout my life and has particularly been manifested by a difficulty to be comfortable with working with others and particularly with anyone in a perceived position of superiority or authority over me.

This has led to a sense of isolation and feeling at the mercy of others, my only counters being to earn the respect and understanding of others and to achieve clarity so that my purpose and aims could not be misinterpreted. This no doubt explains why I have had issues about aspects of this course and of feedback from tutors and others!  The image of the tree has stood for me as a symbol or metaphoric representation of how I often felt when young and have continued to feel as an adult.  Although I have not seen the original photograph for many years and believe that it is probably no longer in existence, I can still remember it as clear as day and the feelings that are attached to it.  The recreation of the image (shown above), the process behind which I will explore more fully in my Learning Log, has brought all of this back and it still feels real for me.

It is interesting to me in the context of the scope of photographic practices that this image clearly falls into a number of  fields.  On face value it is a landscape which would sit quite comfortably amongst the works of early practitioners from the 19th Century such as William Henry Fox Talbot and John Dillwyn Llewelyn in its apparent lack of sophistication and its documentary nature.  Equally it could sit amongst the more conceptual works of some contemporary landscape artists such as Jesse Alexander.  There is then the field of emotional metaphoric photography where subjects are selected and processed to portray a representation of feelings common to humanity or specific to the individual artist.  This latter is merging with the field of self – absented portraiture explored in the latter sections of Part 3 ‘Putting Yourself in the Picture’ of this C&N course.  The conceptual background to the image that I have created for this exercise adds depths to its potential meaning which suggest that it is more than a landscape but also a portrayal of a complex emotional state and also a metaphorical depiction of how I see myself and therefore, in that sense, a self-portrait.  This is particularly pertinent to me as the image of myself as a lone tree in a storm needing to find the resilience to remain upright against the prevailing elements is one that often feels real for me.

My choice of the appearance of the final image was determined by my wish to not only create the pictorial imagery of the original but also to suggest, through the use of post-processing techniques in LightRoom, both the passing of the years and the fact that this was a record of an event and an image that happened many years ago and also the implication of slightly dreamy, nostalgic and emotional content. The original image as shot is shown below. 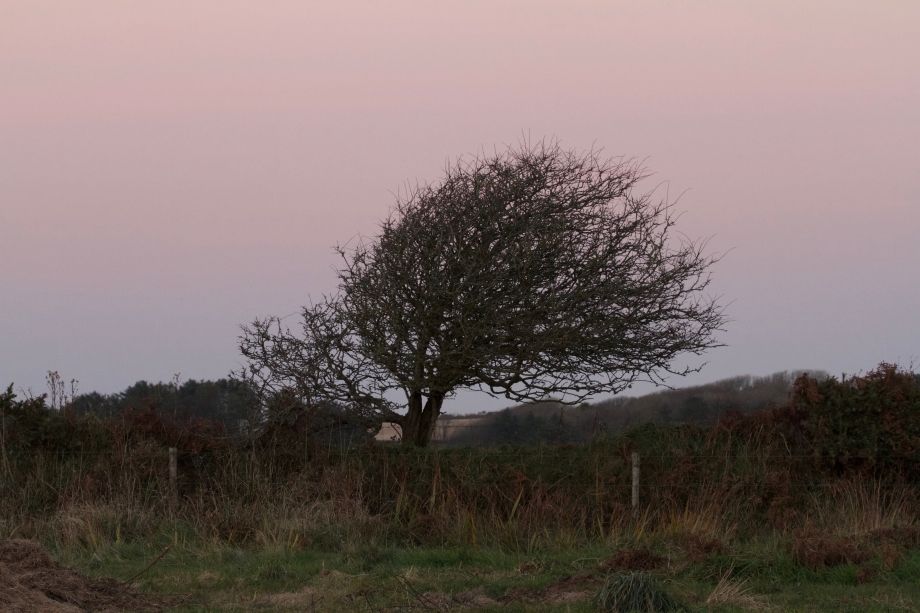