As there is little scope for urban night time photography in the rural area in which I live I used the opportunity of a recent trip to Scarborough to explore this exercise. I had not brought my tripod on the trip so all shots had to be taken hand held using higher iso settings and any support I could find.  I have grouped the images into examples of different scenes.  Throughout this exercise I used a 24 – 70 zoom lens with high iso settings.

1.   THROUGH A RESTAURANT WINDOW

The shots in this group were taken through the windows of a brightly lit quayside restaurant from outside.  I have included two shots of the same subject, namely a team from the nearby road racing motorbike event at Oliver’s Mount, because I was interested in exploring the different approaches I used to the scene. 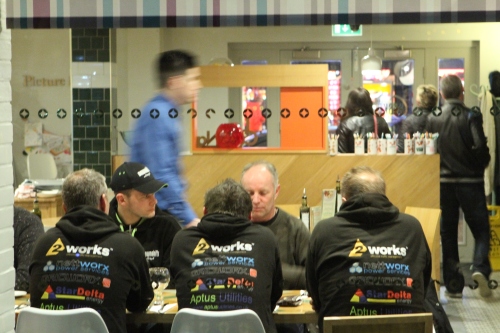 In this shot I placed the main group of the bikers within the wider context of the dining area to include other activity. The presence of other people in the shot keeps the eye moving around the scene creating interest and the blurring of the man in blue provides a contrast between his movement and the stillness of the people around the table.  Even with a setting of ISO 5000 the shutter speed was only 1/25th sec which was enough to freeze the static group but not the more active people behind.  The use of a wider aperture (higher f setting) would have enabled a faster shutter speed.

For this shot I zoomed in on the central group thereby excluding other activity and detail. This focuses attention on the individuals in the group and their interactions.  I like the way that the faces to the left and right are both looking to the centre and that the central face is hidden thereby creating intrigue.  The identical clothing and the concentrated engagement of the subjects pulls them together as a group and is a major element of the image.  Again the slow shutter speed was sufficient to freeze the movement and any camera shake. 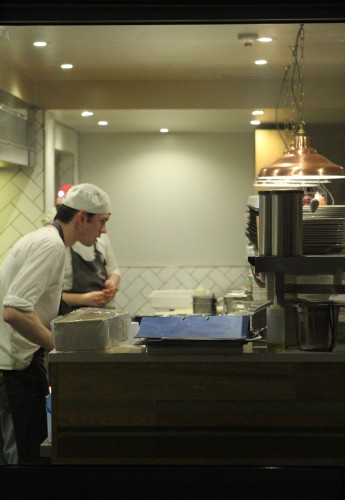 This shot was taken through the end window which gave a view into the kitchen and shows a chef focusing on the food preparation in front of him.  I tried cropping this shot to frame the action more closely but it lost some of the impact and some of the ‘voyeur’ quality of the original so I did not use it here.

Another window of the restaurant revealed this view of a waitress at work.  Again I did not crop this image closer as I already liked the composition and the way that the dark surround makes the lit scene stand out.  I like the subdued tonality of this image and the way that the red belt provides a colour highlight.  This image reminds me to some extent of the chiaroscuro effects used by some Dutch artists.

2.   AROUND THE HARBOUR AT NIGHT

I used the same 24 – 70mm zoom lens and the same settings of ISO 5000 and f5 as for the previous series for these shots taken around the harbour area. 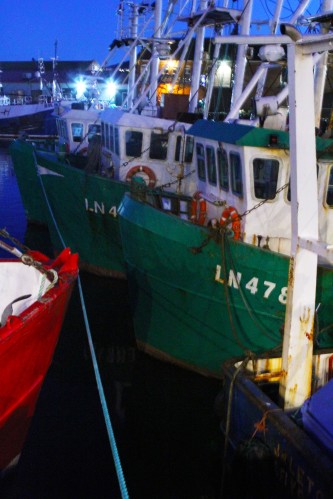 In retrospect I should have set a wider aperture for these two shots to enable a faster shutter speed but my partner was wanting to move on and time was not on my side to start making adjustments!  As a result there is clear evidence of camera shake.  Indeed, there was so little light around that I am surprised that the shots came out at all!  I retained the WB setting on ‘tungsten’ although the ambient lighting was bluish rather than yellow and this has heightened the blues in the final images.  Although the images are not of great quality they do serve to show some of the challenges of shooting at night.

Retaining the same lens and settings, I then explored the various floodlit buildings along the sea front. I used different White Balance settings dependant on my assessment of the type and colour of the lighting. 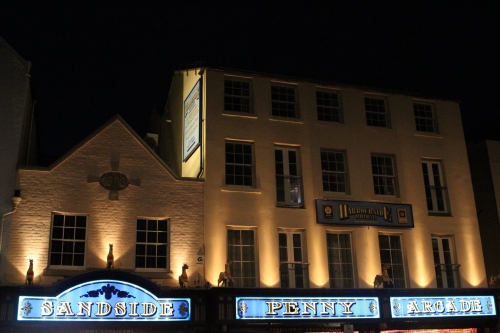 I set the White Balance to AWB as the spotlighting was a white light and I wanted to try to retain the purity of the light on the white walls.  Even so, the spotlighting came out with a slightly yellow cast.  I was interested by the contrast between the classical and rather refined appearance of the upper facade and the modern and rather tacky lighting displays for the Penny Arcade below and I think this comes out in the photograph.  I like the gradation in light from the bright light of the signs at the bottom of the frame through the softer lighting of the spotlighting and up into the darkness of the sky. 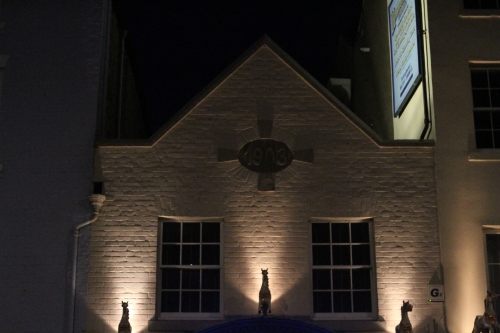 For this shot I excluded the modern displays in the lower part of this old building and concentrated on the more elegant upper part.  I again used AWB in order to try to capture the whiteness of the spotlight beams on the white walls.  I like the lit wall in the upper right area of the frame which adds interest and an extra dimension.

This brightly and colourfully lit building and display hoarding in reds and yellows are in stark contrast with the white lit tower which rises at the end to create an interestingly different angle as well as colour.  I set the White Balance to ‘neon’ to capture the light in this shot. 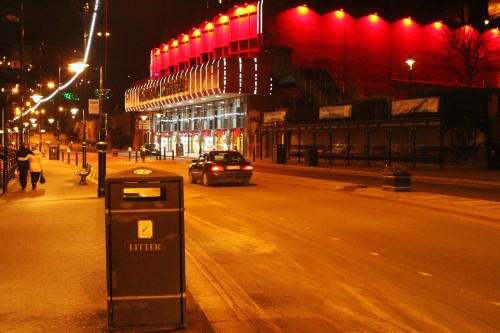 I chose this perspective with the litter bin in the foreground to give depth to the scene and then waited for the car to reach the middle of the frame.  The two pedestrians on the far left were a bonus that further added interest.  I like the way that the angles of the road, the front of the building and the string of lights all together with the direction of travel of the car and the pedestrians all draw the eye towards the vanishing point to the left.  The red and yellow lighting on the building provides a dramatic splash of colour.  The WB was set to ‘neon’ again.

I couldn’t resist shooting this large spotlit wall to see how it came out.  There were two types of light illuminating this wall – yellow tungsten lights and red spot lights.  I again set the WB to ‘neon’.  As with the other photos in this series the ISO was set to 5000 in order to enable me to hand hold the camera in the absence of a tripod. 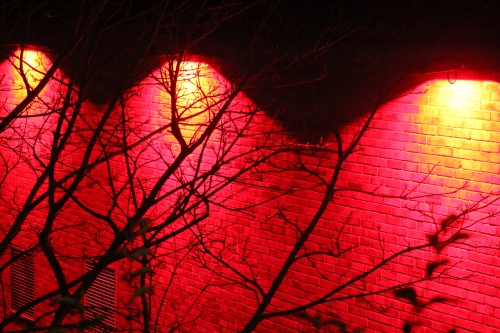 Whilst walking back up from the sea front, my path took me to a higher level than the red and yellow lit wall and some tree branches came between me and the wall creating interesting silhouette patterns against the light.  I have included this shot because it is not my usual sort of image but I like the patterns created by the light and the dark.

In contrast with the brightly coloured preceding subjects, I was attracted by the clinical sharpness and almost monochromatic palette of this subject and so I chose settings of AWB and ISO 2000.  The aperture was f7.1.

4.  LONG EXPOSURES OF TRAFFIC FROM HIGH VANTAGE POINT AT NIGHT

A high pedestrian walkway over a dual carriageway enabled me to try some long exposure shots of traffic at night.  Without a tripod and having to rely on trying to wedge the camera on the walkway superstructure to steady it against the strong wind, it is not surprising that there is some evidence of camera shake in these images.  In order to get the necessary long exposures I had to reduce the sensitivity to ISO 250 but if I had been a little more awake I could also have increased the aperture or used the ‘Bulb’ setting. Something to remember next time when I am without my partner!  Because of the street lighting I set the WB to ‘fluorescent’. 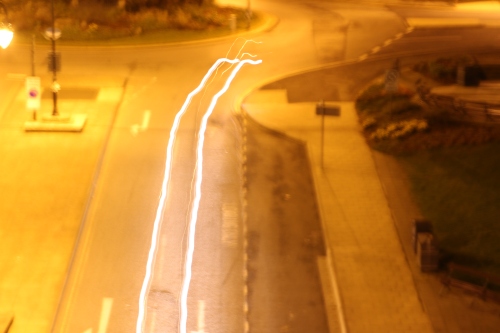 This is a subject that I will have to try again next time I am in an urban location at night as this attempt was not altogether successful.  If I had had a tripod and if I had used the ‘bulb’ setting, the images would probably have been more acceptably sharp so this is an approach I will use next time.

5.  A COLLECTION OF VARIOUS NIGHT SHOTS TAKEN IN SCARBOROUGH

I used the opportunity to explore a number of subjects under different lighting scenarios and some of these are included below.

Taken from steps leading up from the sea front this view of the bay across to the harbour contained an interesting mix of tungsten and neon artificial lighting.  I chose to shoot with the WB set to ‘tungsten’ so that the near light would retain its cool whiteness in contrast to the warmer orange of the more distant neon lighting.  I was pleased to note that the fine string of lights stretching across the width of the frame has also been reproduced as clear white as this contrasts attractively with the background orange.

This brightly lit stained glass window framed by the dark wall was a much more attractive subject than it would have been in daylight.  Setting the White Balance to AWB retained a yellow cast to the light from the window making it warmer and resonating more with the colours in the decoration. 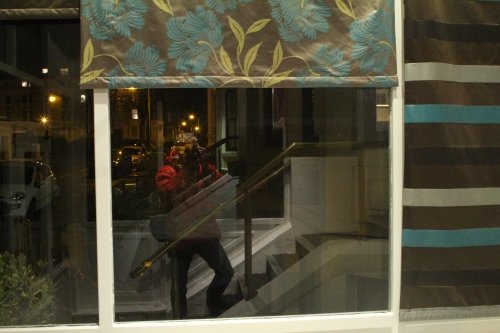 Taken in the glass of the hotel lobby window, I wanted this shot to capture the different spaces, patterns and textures created by the blinds and reflections.  The reflection of myself taking the photograph provides a splash of red colour but also the sense that the the photographer is focussing on you, the viewer, at the same time that you are focussing your attention on him.  This creates a sense of interest and engagement within the central area of the image whilst one’s eye is constantly being drawn to the coloured blinds.  There is more than a little of the ‘Rule of Thirds’ going on in this image!

The yellow cast of the fluorescent street lights and the contrasting blackness of the shadows created by the iron railings provided a subject that I had to shoot. I ended up taking a number of shots from various angles, many of which were spoiled by the effects of camera shake.  I bitterly regretted the lack of a tripod as I could see that some striking images would have resulted.  As it is I have included this example despite its lack of sharpness just to show the potential. 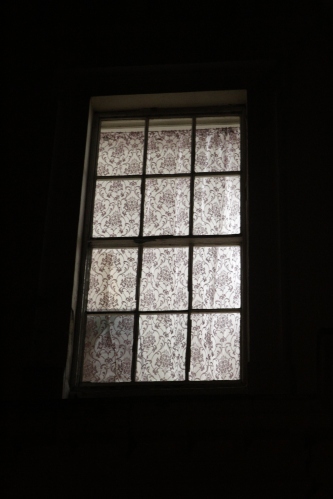 I was drawn to the delicate monochrome pattern created by this curtained window framed by the darkness of the surrounding frame and wall and thought I would see what it looked like as an image.  It has an air of mystery and melancholy for me and these feelings are heightened by the shadow in the bottom left corner of the window, something seen but not seen.  This shot was taken in colour, but the lack of any significant colour in the subject gives it the appearance of monochrome.

These illuminated electric flowers in a glass vase displayed in a window also caught my eye because of their monochrome palette and their shape.  Because the vase was only partially illuminated by the light from the flowers it appeared to rise from the darkness.  I chose not too include the full display in the frame as to do so seemed to me to lose something of the mystery and interest of the subject.

Urban night time photography is not something that I have much experience of and I found the challenge very enjoyable even if I did not have long on this occasion.  I could see possible subjects all around and I found it interesting to see what I could achieve with the constraints of the low light conditions and my lack of a tripod.  The range of lighting types and how they impacted on the subjects was an interesting study as was the effects that different settings on the camera had on the final shot.  I look forward to exploring this further when I next have an opportunity.