This Exercise requires two photos to be taken of one subject, the first to be taken with a naked artificial light bulb and the second with a diffusing material placed between the light source and the subject.  The two images created were then to be compared and observations made.

As a subject, I chose the light coloured flower of an orchid and used a tungsten spotlight as a light source. I mounted the camera fitted with a 24 – 70 mm zoom lens on a tripod and set the White Balance to ‘tungsten’.  I then took 3 photographs, one with a naked light source, one with a single layer of diffusing material in front of the light source and one with two layers. The resulting images are reproduced below. 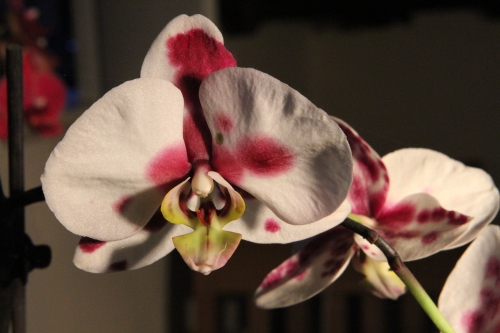 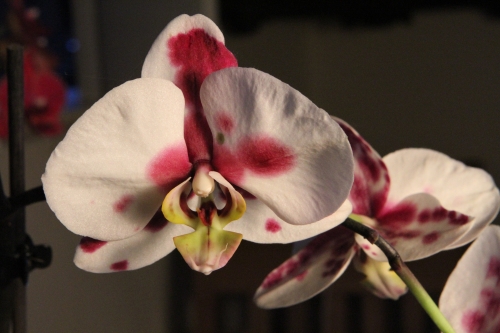 I first used a dark red flower as a subject but found that the colour was so intense with little contrast that there was little variation between the images.  Having changed the flower for a lighter one, the variation with change in lighting is more apparent.  The first image shot with the naked light shows areas of distinct and hard shadow which detract from the image of the flower, creating distraction and reducing its purity of form.  The introduction of the diffusion material between the light source and subject reduces the contrast and the effect of the shadow, softening the overall image.  No doubt changing the angle and distance of the light source and introducing further layers of diffusion material would further reduce the shadow and contrast.  In the three examples above, my preference is for the 3rd image (two layers of diffusion material) as it lacks the distraction of the stark shadows and depicts the softness and roundness of the flower head.  For another subject, it might that more angular and contrasty effect of the shadows created by the naked light might be more appropriate or desirable.

It is clear from this exercise that, before taking a photograph, the photographer needs to decide in advance whether a more stark, contrasty image or a softer, more rounded image is desired and to set up the lighting accordingly.  The difference can be very significant.  This is true whether one is using artificial or natural light. In the latter case, the time of day or the inclement weather will have a considerable impact on the resulting images.