For this part of the exercise I needed a day when there was bright sun with clouds sometimes passing in front to give a constantly changing light.  There has been little bright sunshine for quite a while so when the sun came out from the gloom for a while I grabbed the camera and looked for subjects around the village while the sun lasted.  There was a very strong wind (there has been for days!) and the light was constantly changing with cloud predominating.  Unfortunately, on the occasions it did show, the sunlight was not as strong as I would have wished for this Exercise.

I used a tripod to ensure that the pairs of shots were taken from the same position and the White Balance was set to sunshine throughout. 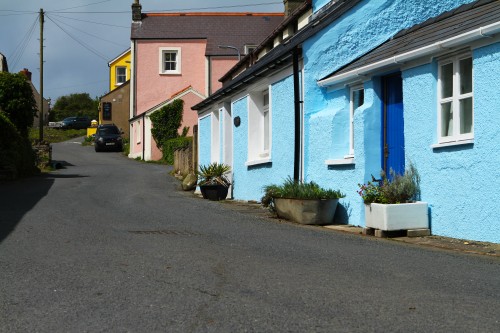 The differences between these two shots are obvious on inspection.  The hard shadow, harsh contrast and light, bright colours in the sunny scene differ markedly from the softer, more uniform hues in the overcast scene.  A closer look at the two images will also demonstrate that whereas the first shot shows a slightly yellow cast the cloudy shot has a bluer cast most obvious in the way that it deepens the hue of the blue cottage and of the roadway.

In order to obtain maximum sharpness and reasonable depth of field in these images I selected an ISO setting of 100 and an aperture of ‘f’ 10, but this required a shutter speed of 1/500th sec.  From the metadata related to these images, I note with surprise that I kept the same aperture for these two shots, adjusting the shutter speed from 1/500th sec to 1/125th sec for the cloudy shot rather than changing the ‘f’ setting.   I am not sure what my reasoning was at the time!

Apart from the almost total lack of shadow and contrast in the cloudy scene, the other obvious difference between the two images is the fact that the white cottage is somewhat over-exposed in the sunny image with considerable loss of detail whereas in the cloudy image considerable surface detail is visible.  Stopping down would have probably enabled more of the detail to be retained in the sunny image but it would have lost a lot of its brightness and interest as a result.  I was interested to note that there was only one ‘f’ stop difference between the sunny and cloudy shots.  As with the shots for Scene 1, there is a bluish cast to the cloudy scene when compared to to the sunny shot. 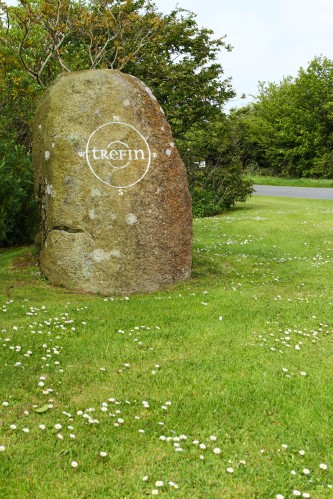 I was surprised to find that the ‘f’ setting was the same for both scenes and I can only put this down to the fact that the overall light across the scene was similar under both conditions. On reflection, there is a hint of over-exposure around the ‘R’ of Trefin in the sunny scene so maybe there was scope for decreasing the aperture to ‘f’ 9 or ‘f’ 10.

I included this shot to demonstrate the dramatic effect of changing light on a landscape resulting from  clouds moving in front of the sun. Where the sun’s direct rays hit the rape field the colour is a vibrant yellow, but in those areas of the field where a cloud has come between the sun and the ground the colour is reduced to a muddy green.  It is likely that this results from diffuse light reflecting from the blue sky meeting the yellow of the rape and producing a green colour.  A similar though less dramatic effect can be observed in the fields of other crops on either side of the rape field where the crops show as light green where the sun’s rays hit directly and a darker green where the cloud’s shadow is passing over.

For this part of the Exercise I visited Porthgain, a nearby fishing village with a historical industrial past.  The sky was overcast with rain threatening, although it never actually fell so I was unable to take shots for the next part of the exercise!  The diffuse light covered the scenes from all angles resulting in little or no shadow.   The resulting images were therefore of low contrast with much of the detail retained and good depth of colour.

I photographed a range of subjects from architectural detail to landscape and a narrow to a high range of colours in order to explore the different qualities of the low contrast light.

The lack of direct sunlight has meant that, despite the rugged nature of the subject, there are virtually no shadows and contrast.  The detail of the texture of the stone stands out with no other patterning to distract the eye. 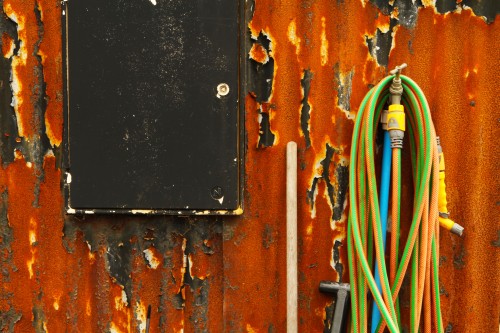 The intensity of the colour in this image is striking as a result of the diffuse nature of the light.  If there had been bright sunlight it would have bleached a lot of the colour out.

Even with the overcast conditions resulting in diffuse light there are some deep shadow areas under the overhangs of these cliffs but the shadows and contrast would have been much more intense if there had been bright sunshine.  The reason that the shadow exists under the overhangs is that neither the light reflected by the sky nor by the sea can reach these areas and there is no other significant light reflected into these areas from any other surfaces.

Whereas this view of the harbour at Porthgain might not have the sparkle and contrast of a shot on a sunny day, the colours have a depth and density to them and there is a sense of harmonious balance  resulting from a similarity in tones across the image as a whole.  I decreased the aperture by 1 ‘f’ stop in order to prevent blow out of the white of the cottage but it was not enough to retain any detail in the sky.  I did try reducing the aperture further but it was making the whole scene too dark and reducing the impact of the white building.  The use of an ND filter to screen out the corner with the sky might have worked but I did not have any filters at the time.  I have bought some subsequently.  I recognise that the end of the silver boat at the lower left of the frame detracts somewhat from the composition, but I wanted to include the foreground interest and I could not find an angle or framing that would exclude one but not the other.  The resulting image is therefore something of a compromise although in its favour the lightness of the silver boat, the pilot’s house and the coil of rope on the quayside do make for a rather pleasing triangle compositionally !

I liked the solid presence of this beached boat against the light sand and so, to try to bring out its bulk and density, I photographed it from a low angle, placed it centre frame and stopped down by 1 stop to darken its hues.  The diffuse ambient light resulted in shadow that is soft and non-intrusive in the image and merely serves to ground the boat rather than distract the eye.  Stopping down further would have had the effect of deepening this shadow which I did not want.

Another view of the harbour from a different angle and because I wanted to capture the green of the fishing boats with the red of the brick walls.  I was also drawn to the soft light on the sand in the foreground.  The overall softness of the tones and the depth of colour in the boats and wall are a product of the diffuse light on this overcast day.  It would have been a very different, and to my mind less appealing, image if taken on a bright sunny day.

For the third part of the Exercise, I photographed the rain-lashed window from the inside and then took the camera out in the rain to capture some shots related to wet weather.   Unfortunately, as soon as I went outside the rain stopped so I took a few shots of rain drops on the vegetation in the garden! To take these photographs I used a 100mm prime Macro lens with an extension tube and mounted the camera on a tripod to give stability.  I used natural ambient light.

Shooting from inside the house,  I set a wide aperture in order to limit depth of field to ensure that only the rain drops were in focus and the background was soft and obscure.  I chose a reasonably high ISO setting as the light levels were low and I wanted to have a relatively high shutter speed to freeze the movement of the raindrops.  I chose a background of mixed light and dark shades in order to add additional pattern and interest to the image.

As there was some movement of the leaf due to wind and the macro lens was very close to the subject, I selected a high shutter speed of 1/400th sec to freeze the movement and retain sharpness, and this necessitated a high ISO setting of 4000.  In retrospect, I could have opened the aperture to say f 5 or less to enable me to reduce the ISO but I wanted to ensure that I retained depth of field to capture both the drops and the leaf sharply. 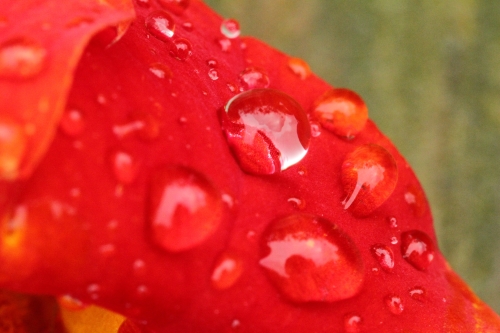 For the same reason as for the image of the leaf I again chose a high ISO setting, but as the subject and its background were much brighter, reflecting more light to the camera, I was able to reduce the shutter speed to 1/250th sec.  Again in retrospect, I could have retained the high shutter speed and reduced the ISO and or ‘f’ settings but I did not do so at the time. 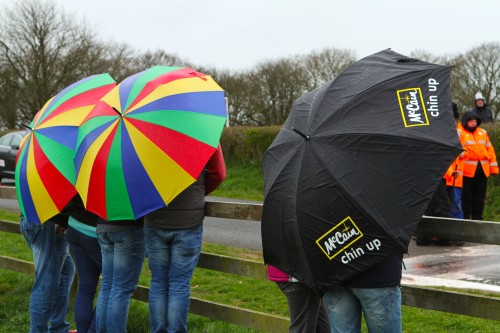 As a change, I have also included a photograph that I took on a wet and windy day at the Oliver’s Mount road racing circuit at Scarborough. I liked the two brightly coloured umbrellas together and the contrasting black umbrella with its encouraging message!  The onlookers are watching the marshals clearing up the debris and oil after a rider had crashed in the wet conditions.  The image benefits from the fact that the orange clad marshals are looking to the right towards out-of-shot action whilst the line of the railings leads off to the left creating movement and tension.  The image would be improved if the car on the left of the frame was removed as this adds unnecessary distraction.

I have recognised for some time that shooting in bright sunlight can bring disappointing results unless the scene has considerable variation in lighting and contrast. However, this Exercise reinforced for me the benefits such as more balanced and softer tonality, deeper hues and reduced contrast that can be gained from shooting in dull or wet conditions and I will certainly be taking future opportunities to practice it more. I would also like to experiment with shooting in black and white under these circumstances to see what can be achieved.

It is also clearer to me now that the choice of subject and one’s desired treatment of it will influence one’s choice of weather conditions for a shoot just as much as one’s choice of studio lighting is influenced in indoor shooting situations.