“What did you do over Easter this year?”

“I spent it on an island painting a lighthouse!” 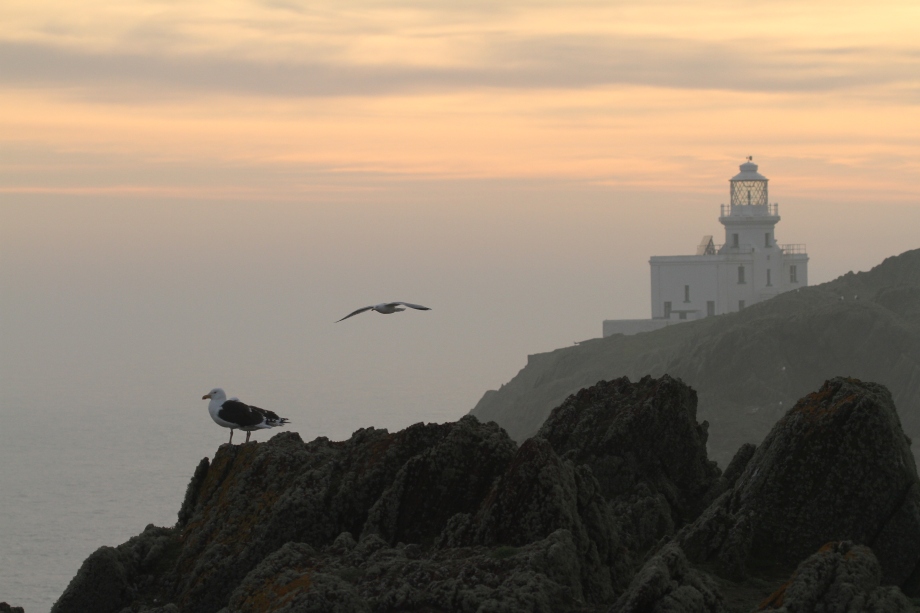 How many people would be able to answer that, I wonder?  Not many, I guess.  The idea conjures up romantic visions of sunshine and blue seas, of lazily watching gulls drift by as one gazes towards the distant horizon and occasionally dabs watercolours onto paper between sips of chilled Chablis.  When I was offered the chance of spending a week on Skokholm Island off the Pembrokeshire coast I jumped at it, but I was well aware of the reality. I knew that what was in store was rather different from this idyll, but I was really looking forward to the experience anyway.  I had done it before! 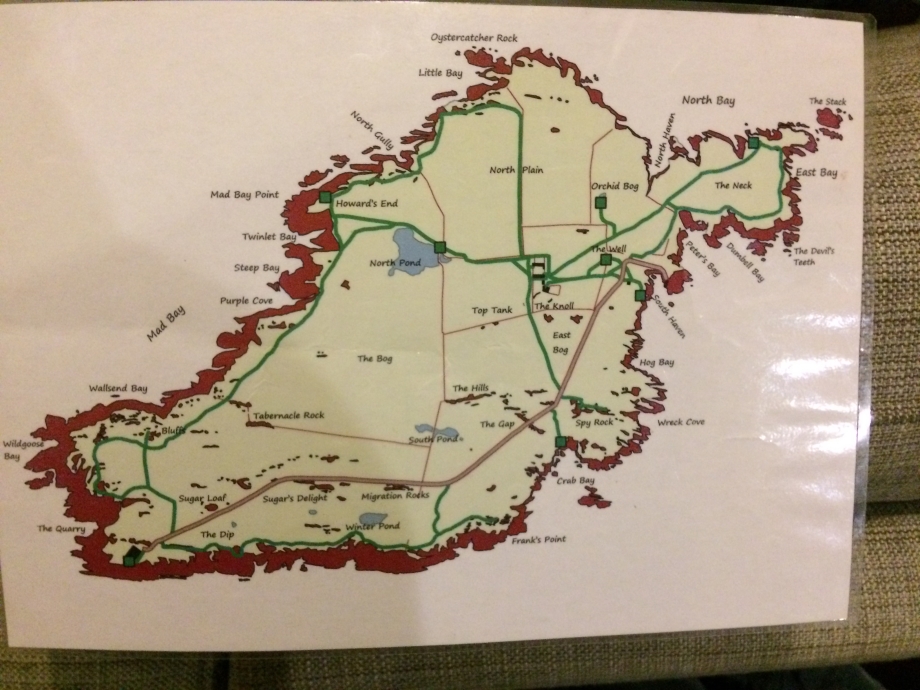 But first, what and where is Skokholm Island?  A 260 acre exposed island composed of late Silurian / early Devonian mudstones and sandstones with spectacular red sandstone cliffs, Skokholm lies about two and a half miles off the south-western tip of Wales next to its larger neighbor, Skomer Island. Of great international conservation value, the island is a National Nature Reserve (NNR), a Site of Special Scientific Interest (SSSI), part of the Skokholm and Skomer Special Protection Area (SPA) and it lies within a Marine Nature Reserve.  Whilst the name ‘Skokholm’ derives from the Norse for ‘Wooded Island’, nowadays no trees remain apart from the occasional low-level bush, bent and stunted by the strong onshore winds. However, indicator woodland flower species such as bluebell and lesser celandine exist as evidence of its wooded past. Instead of trees, the island is carpeted by diverse salt-tolerant maritime vegetation including grasses, white Sea Campion, pink Thrift and Golden Rod, all cropped closely by the local rabbit population or stunted by the prevailing winds and creating a beautiful natural garden during the Spring and early Summer.  Whilst Skokholm is home to a rich ecology, the principal conservation value of the island lies arguably in its internationally important sea bird colonies and its status as a stopping-off point for migrating birds in the spring and autumn which has led to the establishment of a Bird Observatory on the island. 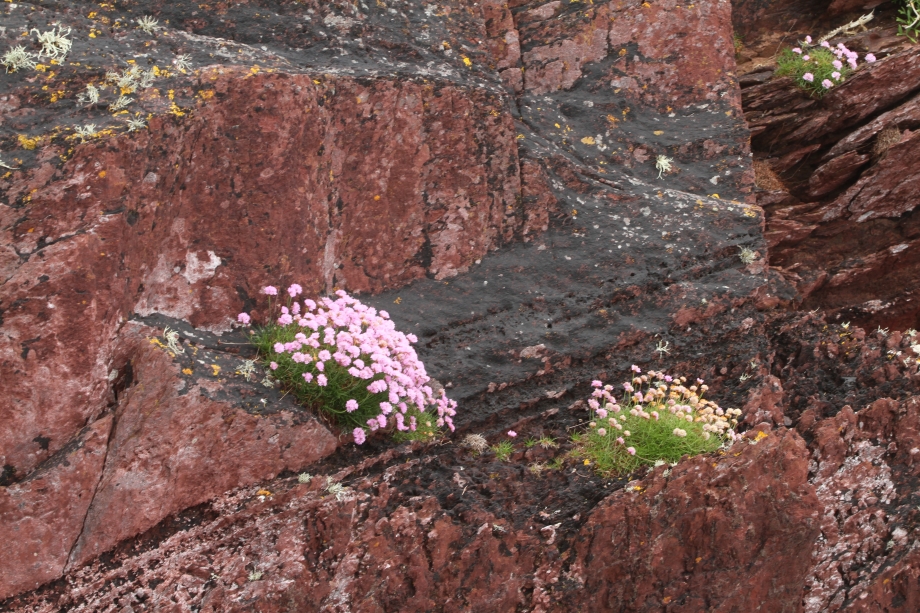 Skokholm Island is probably best known for its association with the pioneering ornithologist and island dweller, Ronald Lockley.  Lockley moved to the island in 1927 after taking out a 21 year lease and, despite many difficulties and privations during his stay, he adapted well to island life before having to move to the mainland when the military took over the island at the start of the 2ndWorld War.  After his arrival, he quickly started to carry out research into the island’s breeding populations of Manx Shearwaters, Puffins, Storm Petrels and rabbits and in 1933 he established the first British bird observatory on the island. Lockley was a prolific producer of books and research papers including a monograph on Shearwaters, the result of a detailed 12 year ringing study, and his work on rabbits was an inspiration for Richard Adams during his writing of ‘Watership Down’.  He founded the Pembrokeshire Bird Protection Society, a forerunner of the current Wildlife Trust of South and West Wales. 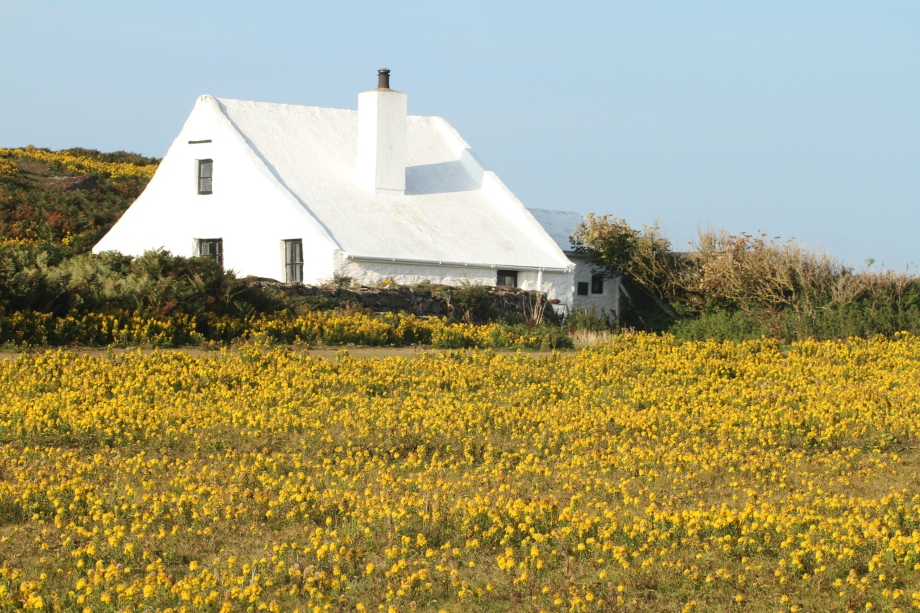 The human story on Skokholm goes back at least 5,000 years when Mesolithic hunter-gatherers occupied the island either permanently or seasonally as evidenced by flint flakes from the production of weapons and tools.  Recent LiDAR surveys using airborne laser technology have identified extensive field boundaries, enclosures and settlements of farmers from the Iron Age and Medieval periods, some fields still showing evidence of hand tilled cultivation ridges.  In medieval times the island was used as a warren, a rabbit farm, and provided a source of rabbits to supply the kitchens and tables of mainland landowners including the Bishops of St Davids.  Ronald Lockley also tried to make a business from rabbit breeding but found that the writing of books was more lucrative! 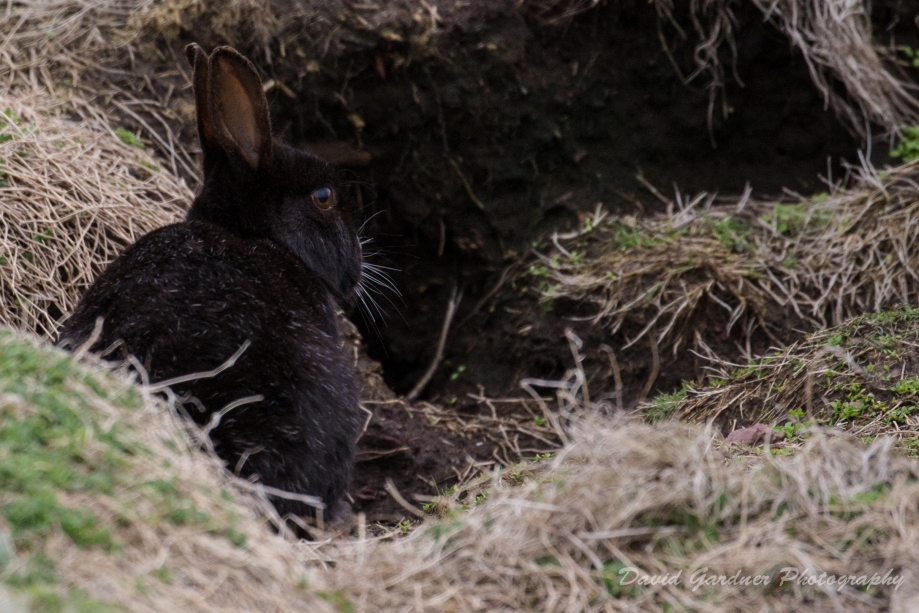 The only permanent buildings now in existence are a house and farm buildings dating to the mid 18thcentury and renovated by Ronald Lockley during his time on the island, and a lighthouse built by Trinity House during the 1stWorld War. The construction of the latter was only made possible following the construction of a jetty at the opposite (mainland facing) side of the island, which enabled building materials to be landed and transported to the site via a narrow gauge railway powered initially by a donkey, then a pony and finally a tractor.  Some of the original tracks still remain.  There is also an 18thCentury lime kiln by South Haven. 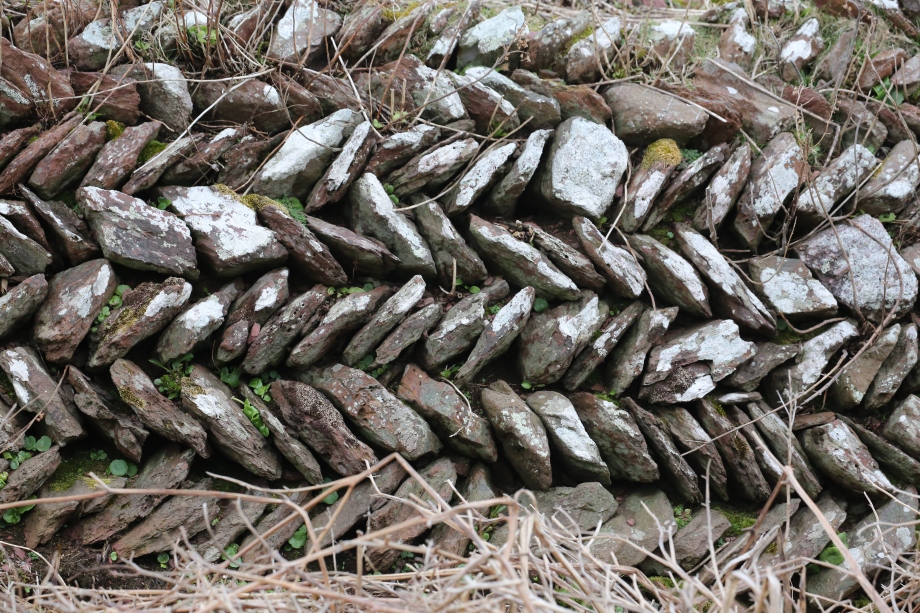 Lockley’s efforts to restore the farm buildings were given a major boost shortly after his arrival on the island when a large two masted schooner, the ‘Alice Williams’, foundered on the rocks in 1928 and provided him with large quantities of timber and other valuable materials, including its cargo of coal, which he had to manhandle up the cliffs from the wreck site.  The ship’s wheel, the figurehead and the transom bearing the ship’s name now grace the aptly named ‘Wheelhouse’, a large room in one of the farm buildings where island visitors now gather to eat meals.  A replica of the figurehead commissioned from local artist Sean Kehoe now graces the cliffs overlooking the landing jetty at South Haven after the original was moved indoors to protect it. 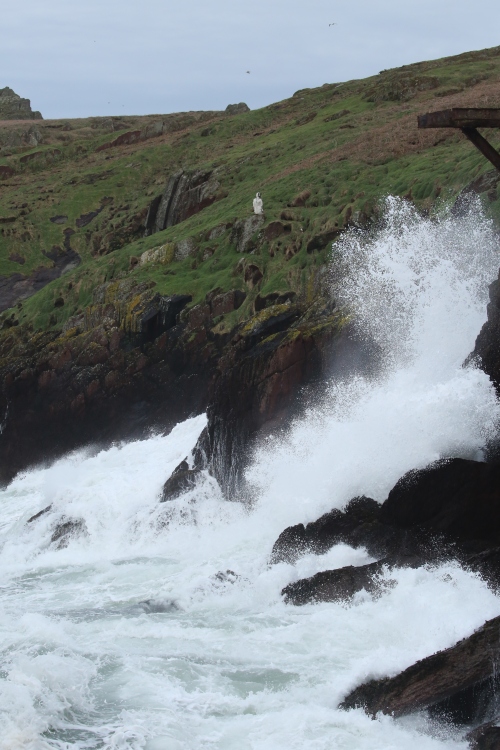 In more recent years, after a period when the Bird Observatory closed in the 1970’s and the farm buildings had been allowed to deteriorate by its then owners, the Wildlife Trust of South and West Wales were able to buy the Island in 2006 and also subsequently bought the lighthouse from Trinity House in 2012, both purchases being made possible following public appeals.  The Trust, largely through the sterling work of volunteers, has since restored and upgraded the farm buildings and the lighthouse to provide accommodation for visitors, research workers, volunteers and wardens.   The farm buildings have also been re-accredited as a bird observatory in 2014. 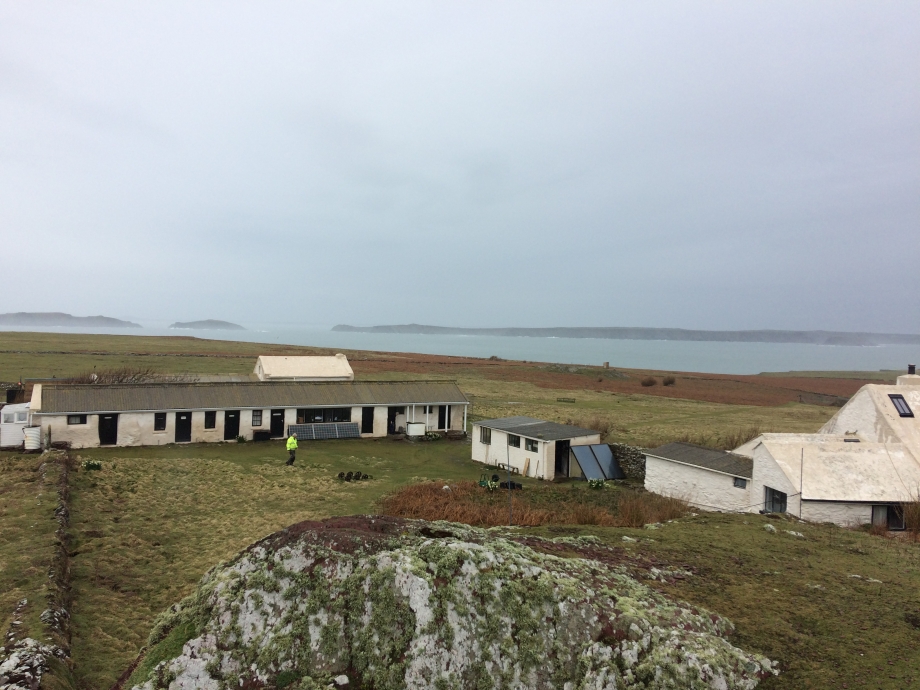 So why was I asked to go out to this wild and windswept area of rock off the Welsh coast?  The answer lies in the legacy of Storm Ophelia which hit the Welsh coast last November. As well as causing the loss of so many seal pups from the pupping beaches around the coast and causing damage at sea and on the mainland, the storm whipped up waves so large and powerful that a number of windows and a heavy wooden door at the Skokholm lighthouse, which sits 100 plus feet above the sea, were smashed in and seawater flooded through the building. 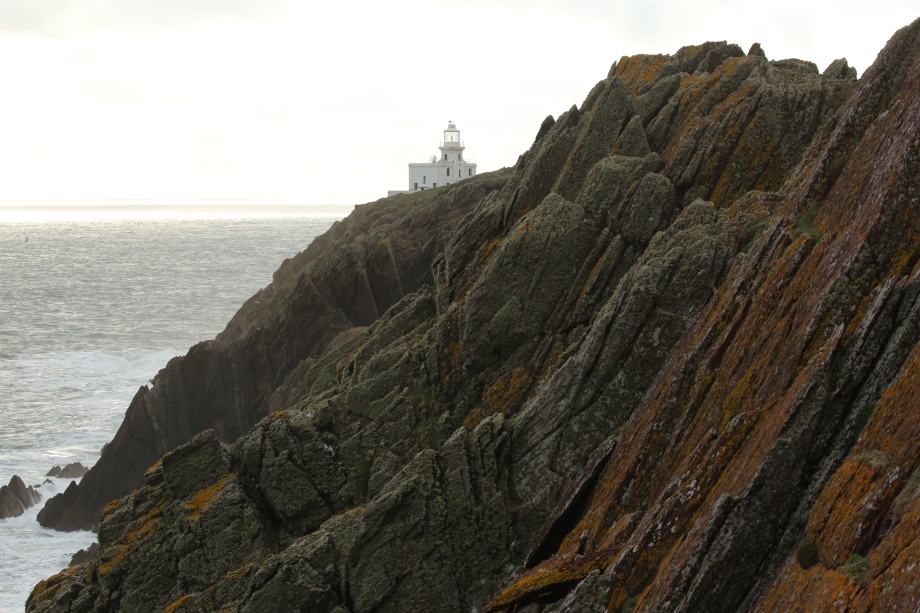 Whilst the Wardens had taken immediate emergency measures to prevent further damage, a team of volunteers was required to carry out essential cleaning and restoration work both to the lighthouse and the farm buildings so that they were habitable again. Two work gangs of volunteers were organized to go out to the island on successive weeks and I was to be on the first week over the Easter weekend.  Little did I know what was in store and that, due to the weather, we would be trapped on the island for an extra day and a half, but that is a story for another day! 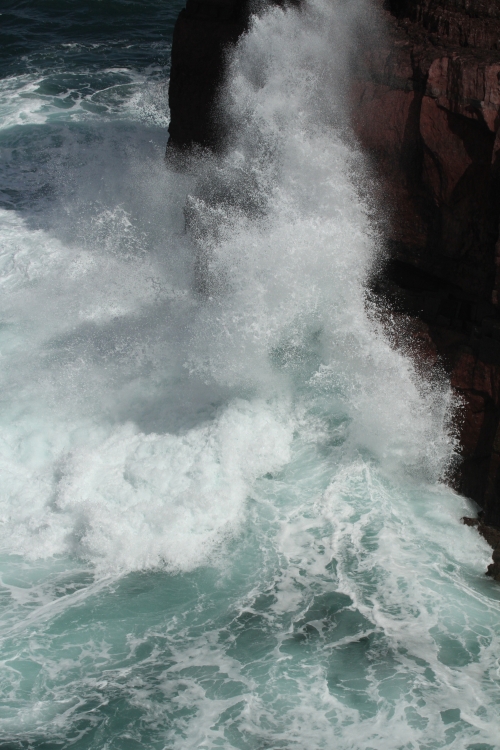 In Part 2of this 3 part article of ‘Life on Skokholm Island’I will be giving some insights into the lives of some of the wildlife that calls the island home, lives that can be as complicated as anything in ‘Eastenders’ and that can involve major risks and international travel. 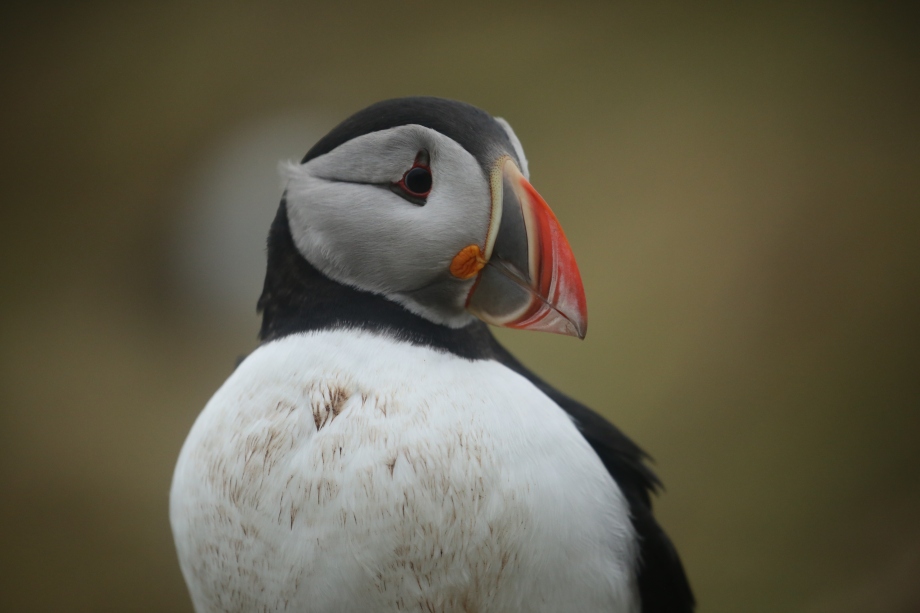 In Part 3I will return to the recent week that I spent on the island and describe the activities of those fellow workers that I shared the experience with so that a picture of island life will emerge.  I can assure you that you will be intrigued!

Please note that all photographs are Copyright protected.  Prints in various sizes of any photographs used in the articles can be obtained by contacting  the Author.